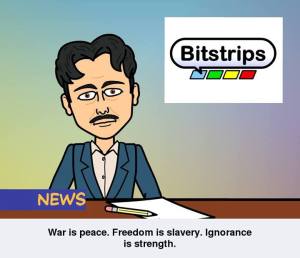 In the fall of 2013 I took Writing 326 at UVic which is a course in transmedia, media which crosses multiple platforms with a focus online. I wanted to see if I could make art out of something that is essentially artless. I wanted to take something bland, boring, and banal and attempt to inject some semblance of meaning into it.

Bitstrips. Some love them, most hate them, why?  These intrusive little polarizing comics place what Martin Heidegger called “average everydayness” upon a public pedestal and attempt to bathe these moments in attention.  The mundane and the inside jokes clog our newsfeeds and attempt to pass themselves off as worthwhilewhen they have about as much charm and intellectual value as clumps of drain hair. Therefore, I decided to take something with no cultural value and inject it with one of the most sacred institutions of art, literature.

I was so intrigued by the backlash that occurred when Bitstrips gained popularity. Why do we have such a negative reaction to such a benign and fairly innocent format of expression? First we must address the burgeoning attention economy. The internet is frothing with so much information as we navigate it. The time we choose to allocate toward a post, a video, or a status update is becoming rare, and therefore, a commodity.

A Tale of Two Cities by Charles Dickens vs Litstrips

When we spend time poorly online the reaction is akin to losing  a $10 bill on the way to work or getting stood-up by a friend; a complete and total waste. The reaction to Bitstrips is similar. As there is little to any value to be gained from learning what people ate for breakfast, how much they hate their job, or what ambiguous event they’re counting down to, there is just as little learning about it in cartoon form. Aren’t cartoons meant to be a source of humour, or action, excitement and certainly pathos? 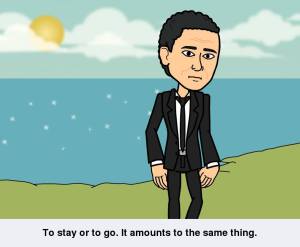 L’Étranger (The Stranger) by Albert Camus vs Litstrips

We must then ask ourselves, what makes something funny? That is a philosophical debate about as massive as “what is art,” or why? For simplicity’s sake, I subscribe to the Incongruity Theory of Comedy.  The simplest form of humor is the reversal of expectations. Person goes for a walk, person reaches destination = not funny. Person goes for a walk, then that person slips and falls down = hilarious. Comedy is built on the foundation of the fulfilment of a promise of the reversal of expectations (this is a very baseline simplification and entire books have been written on the matter). Bitstrips attempts to show us an incongruity, yet they’re far too predictable, fulfill our expectations of everyday life, and therefore are not artful.

The Catcher in the Rye by JD Salinger vs Litstrips

A person who hates job, you don’t say? A person is counting down to something ambiguous, who cares? A person bought a lovely meal at a restaurant, worst. post. ever. Bitstrips built itself on a foundation of fulfilling expectations of everyday life without reversing said expectations. I found this fundamental failure compelling enough that I had to find a way to give them a second life.

I was also inspired by Teju Cole’s Seven Short Stories about Drones, in how he repurposed lines from literature in order to call attention to the atrocities of drone strikes. I decided I could satirize current events, mix them with literature, then put them into Bitstrips in order to skewer them. At the time, Vladimir Putin was making headlines for his human rights violating stance towards homosexuality. Rob Ford was also in office in the city of Toronto, making headlines for his antics and substance abuse.

Ulysses by James Joyce vs Rob Ford vs Litstrips

Bitstrips are more irrelevant than ever. Their only claim to relevance came in the absolute outrage and vitriol we spewed at one another before realizing we could block them from Facebook newsfeeds. I decided to take something timeless, something revered and insert it into something that time will inevitably forget. Quotes from our beloved literature crossed with average Bitstrips situations and often mixed with timely figures and current events. That was Litstrips. 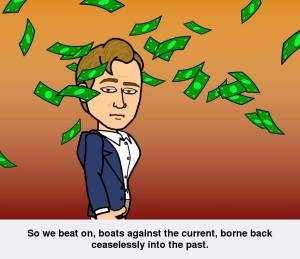 The Great Gatsby by F. Scott Fitzgerald vs Litstrips

And like their inspiration, Litsrips never really lasted in relevnace. Perhaps I didn’t properly promote them but I think that they were doomed to sink into obscurity alongside the app that spawned them. Chuck Palahnuik even retweeted the Project Mayhem one after I tweeted it to him (which made me giddy like a nerd on game day). Internet fads come and go at such an exorbitant speed, they’re often over before you hear of them. The dead horse is already so beaten you’ve generally just found your best blunt object by the time people are three horses away.

The internet evolves, the extinct are long forgotten and we beat on, boats against the current, borne back ceaselessly into the past.

The Idiot by Fyodor Dostoyevsky vs Vladimir Putin vs Listrips

Joshua James Collis is from the West Cost of Canada. He sold cell phones for a while, then settled on earning a Bachelor of Fine Arts from UVic. He’s also played the bass in dive bars, been in one of Victoria’s largest art collectives, edited a theatre review and written and directed some University films that no one has ever seen. View all posts by joshuajamescollis