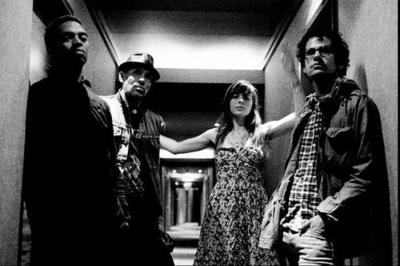 Originally published in Rifflandia Magazine 2013. Rifflandia is an annual world class music festival in Victoria, B.C., Canada and I was fortunate to write a couple articles for them.  Here is my write-up for El Paso, Texas‘ Bosnian Rainbows.

Omar Rodriguez-Lopez eats guitar for breakfast in much the way that one might indulge a Benny during a hangover. He has a slush fund of solo albums along with innumerable collaborations. After 20 years of captaining various indie darlings and solo projects, Rodriguez-Lopez is ready to be a part of a band.

His first success was with At the Drive-In, a group he views as less of a band and more as a collective of musicians. The experience lead him to desire creative control. Next came The Mars Volta where he became something of a generalissimo, dictating every aspect of the band. The experience left him wanting to be part of a band again.

Now the afro clad Rodriguez-Lopez doesn’t want to be the main attraction, he wants to be the guitarist in the band. Bosnian Rainbows gives Rodriguez-Lopez the chance to reinvent himself and his sound once again, this time as a cog in the machine.

After 2012’s reunion of seminal post-hardcore band At the Drive-In, Rodriguez-Lopez put his current band – progressive rock darlings The Mars Volta – back in the toy chest. His next move was to focus on The Omar Rodriguez-Lopez Group, a project which has existed off and on again for years. He began to collaborate with singer Teri Gender Bender of Le Butcherettes. Deantoni Park joined on drums along with Mars Volta member Nicci Kasper on synth, and virtually every member taking a crack at keys. The group took solace in collaboration as a band and became more than another Rodriguez-Lopez solo adventure. They evolved into Bosnian Rainbows.

They released their self-titled debut studio album on June 25, 2013 via Sargent House/Rodriguez-Lopez Productions and Clouds Hill in Europe. Their sound eschews the aggressive post-hardcore of At the Drive-In and the psychedelic prog aspects of The Mars Volta in favour of alternative rock. Fans of the Volta shouldn’t fear though as the sound of Rainbows retains many of the art house rock stylings.

The music sounds like a rainbow in Bosnia would look. A prism of light breaking through overcast skies of a war torn land. The impending sense of doom pulses through their songs as they build to peak like a bomb going off. There’s a sultry sweetness though as Teri Gender Bender’s androgynous vocals shed light across the dire soundscape.

Rodriguez-Lopez doesn’t take a back seat now that he’s just a member of a band. His guitar is as innovative as it is exploratory while maintaining elements of the alt rock sound. These are punk rock kids grown up playing art house punk. Rodriguez-Lopez has his name on as many as 30 solo albums, a decade in At the Drive-In, and yet another decade in The Mars Volta, and collaborations with artists ranging from Erykah Badu to Red Hot Chili Peppers. Bosnian Rainbows stands out as some of Rodriguez-Lopez’s best work. Whether or not they span another decade, Rodriguez-Lopez is happy that he’s in a band again.

Joshua James Collis is from the West Cost of Canada. He sold cell phones for a while, then settled on earning a Bachelor of Fine Arts from UVic. He’s also played the bass in dive bars, been in one of Victoria’s largest art collectives, edited a theatre review and written and directed some University films that no one has ever seen. View all posts by joshuajamescollis